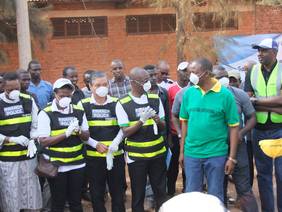 The school zone project is the first initiative in Rwanda aiming at protection of pupils during school hours in the surrounding of schools by establishing vehicles speed limits. The public campaign is focusing on raising awareness of the dangers associated with speed and reckless driving such as overtaking and using phones while driving. The first phase of this project will focus on 30 schools in Kigali with highest accident rates.

The project carried out under the theme, “slow down and let’s save children’s lives together”, intends to protect children from motorcycles accidents, through construction of humps, painting zebra crossings and installing roads signs. Under the projection, motorists will also be sensitized on the dangers associated with speeding, reckless driving and using mobile phones while driving near schools.

“It is the responsibility of the Government of Rwanda and the City of Kigali to protect and ensure the safety of pupils. I strongly support the school zone project and I encourage all citizens to participate and support this project,” said Monique Mukaruliza, the Mayor of City of Kigali.

“Rwanda Transport Development Agency (RTDA) will fully support this project and request other government institutions to join us while ensuring this initiative,” added Mr. Guy Kalisa, the Director General of RTDA.

Myungshyn Lee, the Deputy Resident Representative of KOICA Rwanda Office, mentioned that they seek to raise awareness to prevent injuries and death caused by traffic accidents, especially near schools.

“Our association members have realised that there are no special road signs near schools, especially in Kigali, this issue was therefore discussed with government institutions and they welcomed the idea to join hands to implement this mission,” Myungshyn.

Dr Celestin Ntivuguruzwa, the Permanent Secretary at the Ministry of Education who attended the launch, appreciated the project, saying it is a good initiative that will complement different measures in place to ensure road safety in general. He also appealed to parents, teachers, and the public to monitor children’s movements and respect traffic rules.