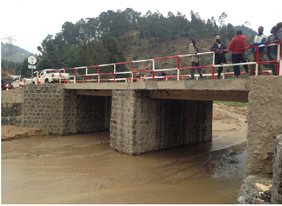 Kirogotero Bridge is 27 meters long that connect Rambura and Rurembo sectors in Nyabihu district on the road Nkuri-Rurembo-Gifunzo (DR28). This bridge initially failed due to heavy rain which causes flood in this area. As such, the sediments accumulated and blocked water passing through.

The rehabilitation of this bridge was contracted to RDF/Engineer Brigade, whereby construction works took 5 months from April 2016, for a total cost of 235, 555,000 Rwf. Construction works of Kirogotero Bridge was financed by the Government of Rwanda through the Rwanda Transport Development Agency (RTDA) and Rwanda Maintenance Fund (RMF).

The project consisted to clean the river bed for proper alignment, destroy the existing Bridge, rebuilt the Bridge, wing walls, retaining wall and gabions to protect the approaches, ensure permanent maintenance of the structure.

The Executive Secretary of Rambura Sector, Mr. Gasana Thomas appreciated the completion of the bridge and said that the new constructed bridge will  facilitate economic exchange in the vicinity and allow access to school,  market, agriculture areas and therefore intervene in the development of sectors and District in general.