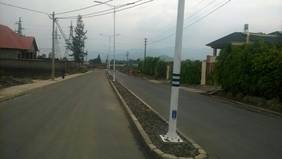 The construction works of Urban Tarmac Roads in Musanze town (14.75 Km), has been completed. The upgraded roads network are expected support the social and economic development in District and attract investors, officials said.

The road, was built by NPD Ltd, a Rwandan company working in road infrastructure development. Construction works started on 11th May 2015 at a total cost of 7,567,261,000 Frw and was financed by the Government of Rwanda.

This first phase which comprises 14.75 km and covers part of the stretch from Musanze town to the Rwanda Defense Force Command and Staff College at Nyakinama and other urban roads around Musanze town.

Eng. Alphonse Kamugisha, in charge of urban roads development at Rwanda Transport Development Agency (RTDA), said that all construction works are completed. ‘‘Overall progress of the project phase I is estimated at 100 per cent ’’ he said.

The phase II of this project (10 Km) will be implemented up on the availability of funds and will cover part of urban roads within Musanze town.

Musanze is one of the six designated secondary cities across the country as laid out in EDPRS II, to transform the economic geography of Rwanda by facilitating and managing urbanization for increased growth countrywide.

With Kigali as the capital, government earmarked six towns of Huye, Rubavu, Nyagatare, Muhanga, Rusizi and Musanze districts for fast-tracking as secondary cities. It is in this regard that RTDA started the project for upgrading of the road network within the above mentioned towns and one of the projects initiated is the upgrading of Urban Tarmac Roads in Musanze town.