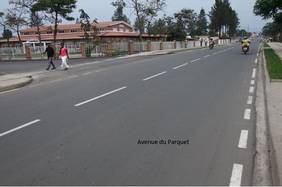 Upgrading works of Rubavu Urban Roads in town (6,619 m) was completed. The upgraded road network is expected to enhance the social and economic development in District and contribute in poverty alleviation as well as improving cross-border trade with neighboring country of DR Congo.

The roads were upgraded by NPD Ltd, a Rwandan company specialized in road construction. The works started on 28th September 2015 completed on 14th October 2016 at a total cost of 5, 589, 509, 05 Euros. The project was financed by the Government of Rwanda and the European Union, said Verjus Hadelin, RTDA’s project engineer.

The project was comprised of 5 roads:

The Mayor of Rubavu District, Sinamenye Jeremie appreciated the completion of upgraded roads, and mention that it will boost the development of the District by facilitating movement of people and goods, promoting business and improve cross-border trade with neighboring Town of Goma (DRC).  He added that apart from job creation during the implementation period, there were other advantages such as increase of value of land and houses along these roads. This will also reduce car maintenance cost, increase riding quality and comfort.

With the EDPRS II, the urbanization and rural settlement, six secondary cities were selected for the promotion of urban development outside the capital city: Rubavu, Musanze, Huye, Rusizi, Nyagatare, and Muhanga. The secondary cities were identified not only to transform the economic geography of the country, but also to avoid pressure on peri-urban land of the Capital city Kigali and urban sprawl, including sprawl of urban functions into rural areas and provide socio-economic opportunities.