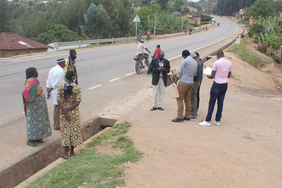 Kigali, 16 September 2020: The contract, for rehabilitation and widening works of the road of 53 km starting from Huye bus station to Kitabi tea plantation, was signed between Rwanda Transport Development Agency (RTDA) and China Road and Bridge Corporation (CRBC) on 13 March 2017, the administrative service order issued on 25th April 2017 marking commencement of works. As works continued, on 17th October 2018 using savings from the project, Gisagara District benefited the long waited road of 13.8km starting from Huye junction to the main road to Akanyaru to Gisagara District office, as an additional work known as addendum No.2 to the project. Another small section was added improving access road to Murambi genocide memorial connected to the main road from Huye to Kitabi with 2.8km length.

All of them constructed successfully with the total contract amount equivalent to 29,788,197,622 FRW for works; co-financed by the Government of Rwanda (GoR), the Arab Bank for Economic Development in Africa (BADEA), the OPEC Fund for International Development (OFID) and the Saudi Fund for Development (SFD) under loan agreements.

The overall project physical progress of this facility is complete at 100%. As foreseen, it smoothly connects Huye, Nyamagabe, Rusizi and Nyamasheke districts located in both the Western and Southern provinces. It also links Rwanda, Democratic Republic of Congo and Burundi countries.

The remaining activities prior provisional handover of the project includes the rehabilitation of used borrow pits and dumping sites as well as addressing outstanding project affected properties related claims as received from local residents of Nyamagabe District mainly. All in all the provisional handover of the project is expected to take place in October 2020 when all the pending issues will be successfully handled and all the stakeholders satisfied.