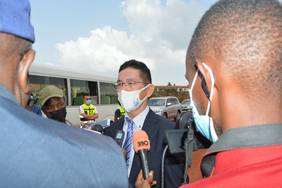 On Wednesday 16th March 2022, the Embassy of Japan organized a media tour of projects in the transport sector:  Rusumo-Kayonza Road Improvement Project, Urban roads in Kayonza, Ngoma and Kirehe districts, Ngoma-Ramiro Road Upgrading Project, and the Project on Capacity Building for Trade Facilitation and Border Control in East Africa. The projects will spur the cross-border movement of people and goods, and strengthen further interregional trade.

The projects are being implemented through a loan of the government of Japan to the Government of Rwanda through JICA.

The road Kayonza-Rusumo (92km) was completed in July 2020 and was constructed at a cost of 58 Billion Rwandan Francs. Additional works including roads in urban areas in Kayonza, Ngoma and Kirehe districts are still under construction and the progress is estimated at 57%. The roads have improved the socio-economic status of the Eastern province in particular but also the country as a whole considering that Rusumo border plays a major role in exports and imports of goods and commodities to and from the country.


The roads have also contributed to the betterment of cities in three districts while helping to implementation of Master Plans. 18 Billion Rwanda Francs were invested in the construction of these roads. Each district will have at least 4.5km of DBST roads.

Ngoma-Ramiro road (53km) is another ongoing project funded by the Government of Japan which aims to enable transportation of Goods and People to Southern and Western Provinces without passing thought the Capital City of Kigali and hence reducing travel time and avoiding trucks jams into the city. This will also reduce the transport cost and trucks carrying goods to Burundi and Democratic Republic of Congo (DRC) will no longer have to pass though Kigali. This road will cost    64Billion FRW.